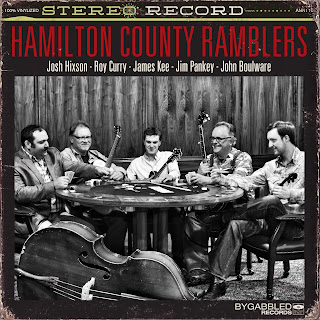 Hey everyone!  We're excited to announce our new self titled project.  We know you'll love it!

You can get a copy from us or from CDBaby. You can also download a digital copy at CDBaby, Amazon and iTunes.

Oh, we also owe a huge thanks to everyone who came out to our release party at the Barking Legs in Chattanooga.  We're told that it was the biggest crowd they've had for the Bluegrass on Sundays!  You all truly humbled us with your support!


I get to hear a lot of new recordings and this one rises to the top for me for sure. - Tom Keeney, KBCS Seattle
Posted by Jim Pankey at 3:08 PM 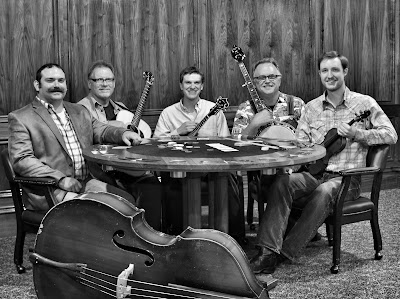 The Hamilton County Ramblers are a Chattanooga, Tennessee based bluegrass group who enjoys playing for anyone who will listen. The group features excellent musicianship, stellar singing and hopefully some tunes you've never heard before.

Follow the link for recent video: Rambler Videos!
Posted by Jim Pankey at 1:06 AM

John Boulware’s musical heritage stretches back for generations. His great-great-grandfather Will McWatters played fiddle, as did his grandfather Brice Bagley. John was inspired to take up the instrument at the age of twelve, and has since learned a wide variety of styles ranging from Celtic to bluegrass to old time. He performs regularly at regional festivals and contests, and has been a featured soloist twice with the Murfreesboro Philharmonic Symphony Orchestra. John holds a National Beginner Division Country Musician Guitar Championship, 2 consecutive age division titles at the Tennessee State Fiddle Championship, and recently became the 2006 overall State Fiddle Champion for Tennessee. John currently resides in Chattanooga, TN. He performs and teaches guitar and mandolin in addition to fiddle.
Posted by Jim Pankey at 1:44 AM

Born in Signal Mountain, Tennessee, James Kee grew up in a hot bed of great local musicians. At an early age, James expressed a special interest in music, singing in school and church choirs as well as the Chattanooga Boys Choir. It was here that James had his first experiences on stage.

Inspired to play by his banjo-playing grandfather, he grew to love bluegrass music at a local show called the Mountain Opry on Walden's Ridge near his hometown. Starting with the acoustic guitar and working his way to bass, mandolin and banjo, James became competent on several instruments and by age 13 was playing in local bands and at local events.

After establishing a firm reputation as a solid local musician, James began touring at age 18 and was privileged to make music with some of the best in the business where he has traveled to and performed in almost every state in the US. While with the popular Lexington, KY based group Newtown, James’ feature song, Must Have Been Crazy, from the band’s self-titled debut album went all the way to number 2 on the Bluegrass and XM Radio Charts and gave James his first recognition as a lead vocalist.

Aside from being a bluegrass musician, James graduated from the University of Tennessee-Chattanooga with a BS in Environmental Science, and is an Honorable Kentucky Colonel. He is also a local entrepreneur and serves on the Board of Directors for the Folk School of Chattanooga.

Josh grew up in Chattanooga, Tennessee and in the foothills of Lookout Mountain, Georgia. He was introduced to bluegrass music by his grandfather Fred Hixson as a child but didn't take up the genre until age thirteen when he began playing the guitar. Mandolin soon followed along with the banjo and finally bass. Josh has played in a plethora of different local bands throughout the region including as well as notable groups like the Crowe Brothers and Shannon Slaughter.

Now Josh turns his attention over to the bass where his impeccable timing,tone and taste will be featured in the all-star band that is the Hamilton County Ramblers.

Along with being a talented multi-instrumentalist, Josh also loves the out of doors where he can be found golfing, hunting, and fishing. Josh has a beautiful family - wife Megan and daughter Carlee. Aside from that, Josh is a 9-1-1 dispatcher by trade and enjoys keeping the citizens of his community safe.
Posted by Jim Pankey at 8:01 AM

Roy Curry began playing guitar at the age of 11. His smooth, seemingly effortless flat picking skills and musical knowledge are a treat to observe. Roy makes his listeners forget the complexity that’s put into producing such amazing sounds on guitar and lets them be drawn in to the pleasing experience of his performances. Known internationally as one of the finest flat pickers in existence, he’s also highly respected locally and enjoys freelancing as well as playing electric guitar. His talent has won him 24 guitars so far, and he’s not done yet.

Roy Curry has graced such respected stages as The Grand Ole Opry and the Kennedy Center.  He continues to be a force to reckon with in the flat picking world.

"...jaw-dropping mastery of both the bluegrass and clawhammer styles." - Dave Higgs, Bluegrass Now

Jim Pankey hails from Chatsworth, Georgia. His banjo style arsenal is unlimited as he blends his knowledge of clawhammer and Scruggs style picking.  Jim is also a fierce competitor, having won past Georgia and Tennessee state championships on the 5-string banjo.

You can also find him among other valued faculty alumni for highly esteemed acoustic music and banjo camps such as Steve Kaufman’s Acoustic Camp, Maryville TN; Banjo Newsletter Workshops; and The Maryland Banjo Academy, Buckeystown MD. Jim currently teaches at the Folk School of Chattanooga as well as offering private lessons.

Jim is a Recording King endorsing artist, and he can even be found teaching the history of the banjo to your kids and grandkids in their local schools.
Posted by Jim Pankey at 1:32 PM